View Cart "Islamic Khat – Declaration of Faith" was successfully added to your cart. 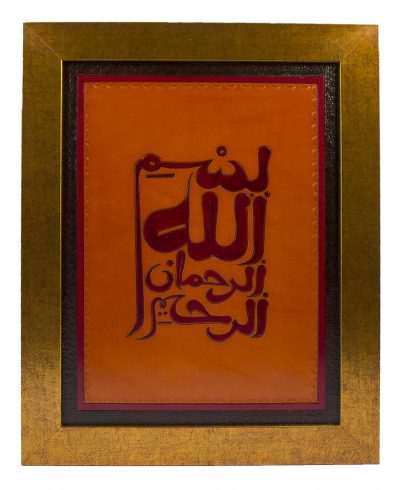 Bismillahi Rahmanir Raheem  the Basmallah by which Muslims begin most routine daily actions. It means In the Name of God, the Most Gracious, the Most Merciful. It encapsulates two of Gods most beautiful attributes. This embossed piece is hand cut, delicately carved, tooled, stamped and dyed by hand in the traditional Granadinian style. The calligraphy is by al-Qandusi from his twelve volume Quran which he completed in 1849. Shaykh Muhammad b. Al-Qasim al-Qandusi (d. 1861), known as the creator of an exquisite, albeit unusual calligraphic script seen throughout the Maghrib, was also a saint endowed with spiritual realities he later revealed through his writings nearing his death.