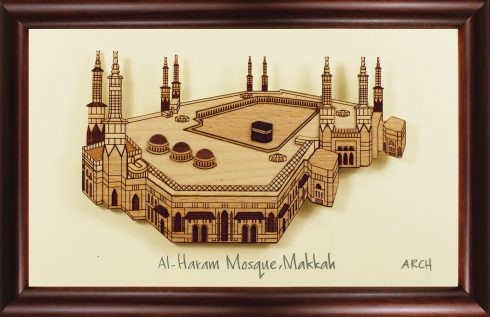 Al Haram Mosque in Makkah holds the holiest shrine of Islam. The Kaabah, is the birthplace of Islam’s founder, the Prophet Muhammad. Al Haram Mosque has nineteen doors, of which four are on the east wall, three on the west wall, five on the north wall and seven on the south wall. It has seven minarets. Before the time of Hadrat ‘Umar (radi-Allahu ‘anh), Al Haram Mosque did not have any walls. Around the Kaba was a small square, which was surrounded by houses. The Caliph ‘Umar had some of the houses demolished and had a one-meter-high wall built around the Kaba, and thus Al Haram Mosque was built. It was restored various times. Today’s Al Haram Mosque, together with the eleventh restoration of the Kaba al-muazzama, was built in 1045 hijri [1635 A.D.].

There are no reviews yet.

Only logged in customers who have purchased this product may leave a review.